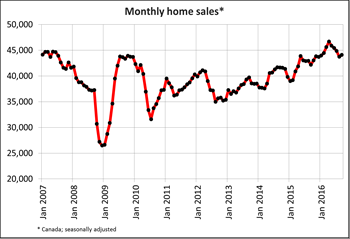 The number of homes trading hands via Canadian MLS® Systems rose 0.8 percent month-over-month in September 2016. Having eased in each of the previous four months, national home sales are 5.6 percent below the record set in April 2016.

As previously reported, Greater Vancouver and Fraser Valley home sales had retreated sharply for five months straight before the new foreign buyers’ tax in Metro Vancouver was announced in August. Activity has returned to more normal levels after having peaked at the start of this year. Indeed, most of the decline since the April peak in national sales reflects the rapid drop in activity in and around B.C.’s Lower Mainland.

“The Finance Minister’s recent changes to regulations affecting mortgage lending has added to housing market uncertainty among buyers and sellers,” said CREA President Cliff Iverson. “For first-time home buyers, the stress test for those who need mortgage default insurance will cause them to rethink how much home they can afford to buy.”

“First-time home buyers, particularly in housing markets with a lack of affordable inventory of single family homes, may be priced out of the market by the new regulations that take effect on October 17th,” said Gregory Klump, CREA’s Chief Economist. “First-time home buyers support a cascade of other homes changing hands, making them the linchpin of the housing market. The federal government will no doubt want to monitor the effect of new regulations on the many varied housing markets across Canada and on the economy, particularly given the uncertain outlook for other private sector engines of economic growth.”

Actual (not seasonally adjusted) sales activity was up 4.2 percent y-o-y in September 2016. Transactions were up from year-ago levels in almost two-thirds of all Canadian markets. Led by the GTA and environs, the increase was held in check by the drop in activity in B.C.’s Lower Mainland.

The number of newly listed homes inched up by 0.5 percent in September 2016 compared to August. As with sales activity, the number of markets where new listings were up on a month-over-month basis and those where they fell was evenly split. With inventory in acutely short supply, the rise in new listings supported higher sales activity in the GTA and the national total.

With sales and new listings having risen by similar magnitudes, the national sales-to-new listings ratio (62.1 percent) was little changed from August (61.9 percent) and remains well off the peak reached in May (65.3 percent).

A sales-to-new listings ratio between 40 and 60 percent is generally consistent with balanced housing market conditions, with readings below and above this range indicating buyers’ and sellers’ markets respectively.

The ratio was above 60 percent in almost half of all local housing markets in September, virtually all of which continue to be located in British Columbia, in and around the Greater Toronto Area and across Southwestern Ontario. However, the ratio has moved out of sellers’ market territory and into the mid-50 percent range in Greater Vancouver and the Fraser Valley.

There were 4.7 months of inventory on a national basis at the end of September 2016. The measure has remained virtually unchanged since April, with fewer sales in the Lower Mainland counterbalanced by a shrinking supply of listings in and around the GTA.

The tight balance between housing supply and demand in Ontario’s Greater Golden Horseshoe region is without precedent (including the GTA, Hamilton-Burlington, Oakville-Milton, Guelph, Kitchener-Waterloo, Cambridge, Brantford, the Niagara Region, Barrie and nearby cottage country). The number of months of inventory ranges between one and two months in Greater Golden Horseshoe housing markets and is less than one month inside the GTA. The Aggregate Composite MLS® HPI rose by 14.4 percent y-o-y in September 2016. Down from 14.7 percent in August this was the first deceleration since March 2015.

While prices in 9 of the 11 markets tracked by the MLS® HPI posted y-o-y gains in September, increases continue to vary widely among housing markets.

Greater Vancouver (+28. 2 percent) and the Fraser Valley (+35.0 percent) posted the largest y-o-y gains by a wide margin. However, single family home prices in both of these markets dropped from the month before, marking the first significant decline since late 2012.

By contrast, prices were down -4.1 percent y-o-y in Calgary. Although home prices there have held steady since May, they have remained below year-ago levels since August 2015 and are down 4.6 percent from the peak reached in January 2015.

The MLS® Home Price Index (MLS® HPI) provides the best way of gauging price trends because average price trends are prone to being strongly distorted by changes in the mix of sales activity from one month to the next.

The national average price continues to be pulled upward by sales activity in Greater Vancouver and Greater Toronto, which remain two of Canada’s tightest, most active and expensive housing markets.

That said, Greater Vancouver’s share of national sales activity has diminished considerably of late, resulting in it having less upward influence on the national average price. Even so, the average price is reduced by more than $100,000 to $358,884 if Greater Vancouver and Greater Toronto sales are excluded from calculations.

PLEASE NOTE: The information contained in this news release combines both major market and national sales information from MLS® Systems from the previous month.

CREA cautions that average price information can be useful in establishing trends over time, but does not indicate actual prices in centres comprised of widely divergent neighbourhoods or account for price differential between geographic areas. Statistical information contained in this report includes all housing types.

The Canadian Real Estate Association (CREA) is one of Canada’s largest single-industry trade associations, representing more than 115,000 REALTORS® working through some 90 real estate Boards and Associations.

Want to join the discussion?
Feel free to contribute!